Most homes are built on one of three types of foundations: a crawl space, a basement or slab.

A crawl space is a raised foundation in which the home is built slightly above the ground. There is usually just enough room to crawl into and through the space. Pipes and other mechanical elements of a home can often be accessed in the crawl space. The floor of the crawl space is typically soil.

A basement is an expanded crawl space, essentially a floor that is either partially or completely below ground level. They can be finished or unfinished. 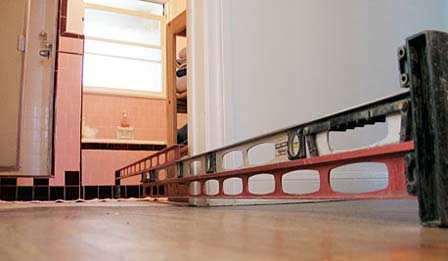 The most common and economical type of foundation is a slab, or concrete foundation. The slab is created by pouring a few inches concrete onto crushed gravel.

The decision as to what kind of foundation to use when building a home is based on factors such as climate, soil type, the depth of bedrock, the location of the water table and appearance.

Initially, most homes were built with crawl spaces and basements. Concrete slabs became popular during the building boom that occurred after World War ll. They were less expensive than other types of foundations, and could be constructed quicker. Some slabs were poured with a thick edge. Others were poured between short walls made of masonry. The slabs were approximately three to four inches thick.

As time went on, it became clear that some type of reinforcement was needed to minimize slab cracks and breakage, requiring foundation repair. The problem was solved by using steel rebars (reinforced bars) and mesh.

Even with today’s advanced building technologies and materials, a home can still have foundation issues, especially older structures. Many times the problem is due to settlement. Foundation settlement occurs when the foundation moves down to a point that is lower that its original position.

Settlement is generally caused by changing soil conditions. For example, increase compaction or soil that shifts. Settlement can also occur due to changes in the moisture content of the soil. When soil gets wet, it expands, when it dries, it compacts.

When a foundation settles too much, it can lead to cracks in walls and ceilings. Windows and doors can become more difficult to open or close, and floors can buckle or begin to slope. House leveling issues may arise.

Although foundation settlement is usually more apparent in homes with a slab foundation, any type of foundation can be damaged by settlement.

If you have an older home, make sure your foundation is inspected on a regular basis. A seasoned foundation contractor or foundation repair expert will know how to tell if you have foundation problems and where to look for possible foundation issues. And they can fix any problems before they become serious.

When a foundation isn’t properly maintained, the damage will only get worse over time and eventually weaken the entire structure.