Per the Los Angeles Times, the vote was unanimous.

This means that building owners with wood-frame, concrete and/or steel-framed structures will undergo seismic evaluations and, if found vulnerable, be retrofitted.

“It’s great for Santa Monica — they’re going to have safer buildings. It is also hopefully the start of a wave,” seismologist Lucy Jones told the publication.

Jones, who has worked with California to educate local governments about the importance of seismically safe buildings, also noted that other areas are starting to acknowledge these measures.

“There are dozens of cities curious at looking at this,” she added. “People are starting to recognize how necessary this is.”

Though Santa Monica is the first city to include steel-framed structures, which make up a lot of the areas high-rise buildings, cities like West Hollywood and Beverly Hills are also examining the benefits of such retrofits.

Of course, L.A. passed similar ordinances back in 2015, calling for the retrofit of wood-frame and concrete structures which had been found vulnerable in the event of seismic activity. About 13,500 wood-frame buildings have been identified but as many as 15,000 structures may need retrofit.

While a spokesperson for Mayor Eric Garcetti said, L.A. is looking at a “range of building types, including steel moment frame buildings,” it’s still to be determined if the city will require retrofits for these structures. 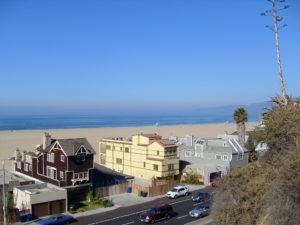 Of Santa Monica’s identified 2,000 buildings, it’s estimated that 1,700 of the structures are wooden apartment buildings with soft-story spaces (otherwise known as carports or open ground story spaces) that might buckle in the event of a large earthquake.

Though costly, Santa Monica is at higher risk when it comes to earthquakes because a fault line runs right through the city. The area was also severely damaged during the Northridge Earthquake, which saw the loss of 1,500 apartments and damage to some of the city’s oldest landmarks.

While steel buildings have not been considered particularly at risk when it comes to earthquakes, Santa Monica is giving owners 20 years to determine if the buildings are up to seismic code. Concrete buildings will have 10 years and wood apartment structures will have two years.