Looks like Los Angeles is getting even more serious about earthquake safety.

City inspectors spent over two years compiling information on soft-story structures in need of retrofitting (aka seismic strengthening) around L.A, and the Los Angeles Times just released the data.

The list, which has 13,500 properties throughout the county, names wood-frame buildings that have vulnerable first floors (above) or open spaces.

After the devastating Northridge earthquake in 1994, L.A. saw numerous structural collapses around the city, including one apartment building that left 16 people dead.

Building owners have already begun to be notified and many are in the beginning stages of the retrofit process, a step that seismologist Dr. Lucy Jones says is critical.

“This is a critical first step. Fundamentally, you can’t fix the buildings if you don’t know which buildings need to be fixed,” Dr. Jones, who also served as Mayor Eric Garcetti’s earthquake safety adviser in 2014, told the L.A. Times. “I think the process of creating these records is helping the city come to grips with what is necessary to really do this.”

While there was opposition from some building owner groups in regards to the transparency of these addresses, ultimately renter rights supporters helped make the release possible.

“Tenants should know, if they’re renting an apartment, how safe those apartments are,” Larry Gross, executive director of the Coalition for Economic Survival, told the site.

Almost half of the soft-story structures at risk are located in the San Fernando Valley. But it’s no surprise; soft-story apartments were wildly popular in the 1950s-1970s and most commonly built in areas that experienced rapid growth. 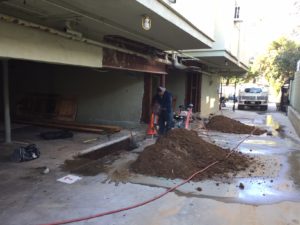 Other parts of L.A. with high volumes of soft-story structures are in Hollywood, Koreatown and on the Westside in areas like Mar Vista, Venice and Palms. Even though these types of structures proved popular and cost-effective in the 50s, 60s and 70s, they are not designed to withstand the seismic shaking of a large earthquake.

Owners of these soft-story structures will have two years from notification to show compliance. Meaning, owners need to either share proof that the building does not need retrofitting or provide plans for a retrofit or demolition.

While there are plenty of companies in Los Angeles who offer retrofitting and foundation repair, Julian Construction is one of the most trusted in the industry.