Earthquake Retrofitting a Must for Southern California Homes 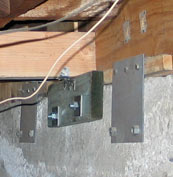 An executive at the company stated the following on earthquake retrofitting: “This is the process of attaching a house to its concrete foundation using foundation plates and anchor bolts. California is “earthquake country” and we who live here should be aware that the up-and-down and side-to-side motion of an earthquake can shake an unbolted house off its foundation. Julian Construction Inc. specializes in foundation bolting and the bracing of cripple walls (short stud walls between the floor and foundation of some houses) by using structural-grade plywood which, if needed, provides greater resistance to earthquakes. These steps, along with properly tying the floor system down with approved framing anchors, will make yours a safer home.”

Julian De La Torre, founder and owner of Julian Construction, stated: “Here in California, we’ve had to deal with earthquakes for years. One thing that not every homeowner may think with, is the effect on their home’s foundation. That could become a problem in time, because the seismic activity weakens a foundation. The worst part is when a foundation has been weakened so much that when a BIG earthquake comes, the structure collapses. Earthquake retrofitting ensures a home is strong enough to stay together and keep the structure safe no matter what happens.”