Since 2013, a little over half of the new homes built across the nation have been constructed with a slab foundation. A slab foundation is a concrete foundation poured onto a prepared surface. It is usually several inches thick. Slab foundations are more commonly found in warmer climates. They are also used for structures built on clay soil. 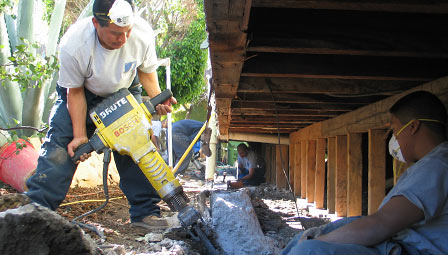 Compared to the cost of other types of foundations, they are relatively inexpensive. They also serve as the building’s floor and can help prevent pests for getting under and into the building.

Many slab foundations are constructed using footings – thickened areas of slab placed on load bearing walls. The footing is often wider than the base of the foundation. It is also reinforced with steel. The footings help transfer the building’s load to the foundation and distribute its weight.

Soil and climate are some of the key factors that determine where a foundation with footings is built. In regions where the ground freezes, the footing are put in place first, followed by the building’s walls and finally, the slab itself.

Stem walls are also used when building slab foundations. The walls, which are usually made of cinder blocks, connect the foundation to the structure’s vertical walls.

Before a slab foundation can be poured, the ground underneath it needs to be leveled (also called grading). A slight slope will be created to make sure water drains away from the building.

Julian De La Torre, expert foundation contractors in Los Angeles, house leveling & foundation repair Los Angeles and founder of Julian Construction ( www.julianconstruction.com ), has inspected over 15,000 structures, working with engineering firms & local departments of building & safety. The company has done more home foundation repair (Los Angeles) than any other company in the area over the last five years ( https://julianconstruction.com/services/foundation-repair/ ). Julian Construction owns its own company and is a “no middlemen” model  -no salesmen or subcontractors–you get the principals of the company & its workers under your home.